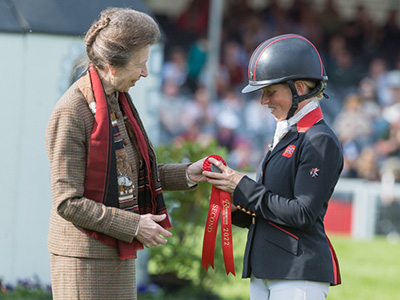 Ros was a class act at Badminton. Allstar B put in another very consistent performance to finish in 12th place, show jumping penalties dropping him out of a potential top five placing but he was undoubtedly happy to be back at one of the ‘Big B’s’ – according to co-owner Caroline Moore he was squealing with excitement in his stable.

Lordships Graffalo was an out and out superstar. Just 10-years-old and attempting his first 5* he was the only horse in the field to finish on his dressage score – in second place. Ian Stark rated his cross country performance as ‘the round of the day’.

There will be a Badminton gallery up on the website in the next day or two, and to read more about Ros’ thoughts ahead of cross-country day, click HERE.

Ros posted on social media: ‘There are no words for Lordships Graffalo on his 5 star debut. 2nd at Badminton was beyond what we could ever have hoped for. And the legend that is Allstar B did me proud yet again. I couldn’t love him more. This was such a team effort so thank you all.’

Ros was also awarded the Frank Weldon Memorial Trophy as the rider of the youngest British owned and ridden horse in the top 12, while Lordships Graffalo’s owners Michelle and Archie Saul won the prize from Sport Horse Breeding of Great Britain. Finally Lordships Stud won £1,000 from The British Horse Foundation as the breeder of the highest placed British bred horse.