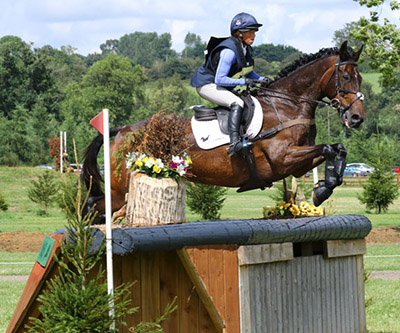 Ros returned to competition at Aston–le-Walls (4), just one month after the arrival of Ziggy. She jumped two double clears on Allstar B and Zenshera in the Open Intermediate. Ros took it steady across country, but Zenshera still finished 7th, with Allstar B 20th after a slower round.

Ziggy was on show with her father Chris, Ros saying: “It didn’t feel too different to before and it’s been quite a relaxing day with these two experienced horses and no pressure. I also have a great team behind me, which has been a real help.

“It was lovely to jump two double clears today — speed has never been my strong point, so that accounts for my time-faults.

“We can start to make plans now — we take each day as it comes with Zenshera as he’s a bit older, but I would like to take him back to Pau CCI5* at the end of October, where he has run well before.

“The main aim for Allstar B is to get part of his Olympic qualification, which means he will need to do either one CCI5* or a CCI4*-S plus a CCI4*-L.”

Grafics was also in the ribbons with Richard Jones, 9th in an Open Novice, also with a double clear.