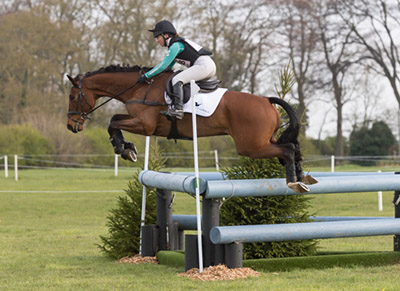 Tom McEwen was in action at Aston-le-Walls (2) last week, riding both Rehy Royal Diamond and Lordships Graffalo in intermediate sections. Both did nice dressage tests and had a rail apiece – also matching each other with a 20 jumping penalties on the cross country course. Meanwhile Tom Jackson had a similar result in the non-ERM CCI-S4* at Chatsworth with Pencos Crown Jewel; a rail down and a run out.

Tom McEwen rode No Excuse at Chatsworth in the same section as Pencos Crown Jewel, but only completed the first two phases of the competition .

Alex Postolowsky posted two good results on Ros’ rides at Richmond. Izilot DHI was runner up in a novice section, adding just a few cross country time penalties to a dressage score of 27.3, while Lordships Parc Royale placed 3rd in a BE100 on a dressage score completion of 34.3.

Meanwhile DHI Jura finished 7th under Georgie Frow in a BE100 at Moreton Morrell.