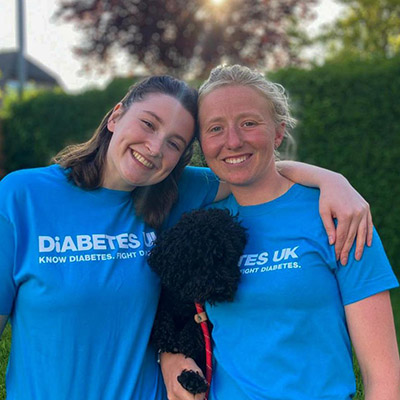 Ros’ head girl, Georgie Frow, is swapping riding boots for walking boots to take on Britain’s three highest mountains to raise money for a charity that is close to her heart. She was diagnosed with Type 1 Diabetes 10 years ago, and to mark a decade of living with the condition, will be taking on the Three Peaks Challenge for Diabetes UK.

Georgie was 13 when she began to lose a lot of weight and began to suffer bouts of illness. After being taken to hospital it was discovered that she had developed Type 1 Diabetes, which means her body cannot produce insulin which controls blood sugars.

What triggers the condition is still not fully known, but those living with it must administer insulin themselves, either by injection or insulin pump. As an active teenager, the regular snacks she needed meant Georgie would often give herself six or seven injections a day – but now, with a modern pump fitted, managing the condition is easier for the 3* rider, a regular on the British Eventing circuit – competing herself and supporting Ros.

“I feel very lucky that with an active lifestyle and a great support network my diabetes hasn’t had a huge effect on my life. Although the constant management including finger prick tests and injections are annoying, it’s just a part of life now. However, some people are not so lucky and struggle much more mentally and physically, which is why Diabetes UK is vital,” said Georgie.

Joining her is friend Poppy Torrington, an Edinburgh University graduate who has remained good friends with Georgie since school days. Currently back in Louth, although about to move back to Scotland to pursue a business career in Glasgow, Poppy is a keen hiker.

“When we decided to raise money, we wanted to have a bit of an adventure too and this will certainly be one. We will be staying on the road as we take on Snowdonia first, then onto the Lakes and Scafell Pike, before ending in Scotland and on the top of Ben Nevis, the highest peak at 1,345m,” said Poppy.

There will be one more member of the hiking party – Lola, Georgie’s very fit and active poodle!

The friends want to raise at least £500 for the challenge, on the weekend of Friday June 11, and to give please go to https://www.justgiving.com/fundraising/georgieandpoppy3peakschallenge