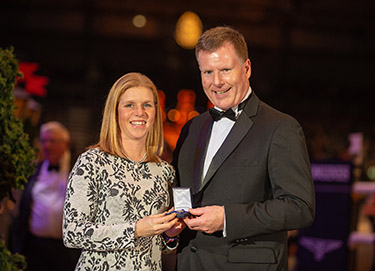 Ros was among the recipients of the BEF Medal of Honour this week at Olympia, The London International Horse Show.

Three ambassadors for equestrian sport were presented with their awards in the main arena by BEF Chief Executive, Nick Fellows and they join a cohort of 313 medal holders, dating back to February 1949.

The BEF Medal of Honour is an award designed to recognise activities connected with international endeavour in relation to equestrian sport and it is awarded for outstanding services to the British Equestrian Federation or its Member Bodies.

Team GBR eventing athlete, Ros won Individual Gold and Team Gold at the FEI World Equestrian Games in Tryon, North Carolina with her own and Caroline Moore’s, All Star B. Her Medal of Honour follows on from two incredible seasons claiming two top five finishes at the Mitsubishi Badminton Horse Trials, a Team Gold at the European Championships in Strzegom, Poland and an end of year ranking of second in the FEI Eventing World Athlete Rankings.