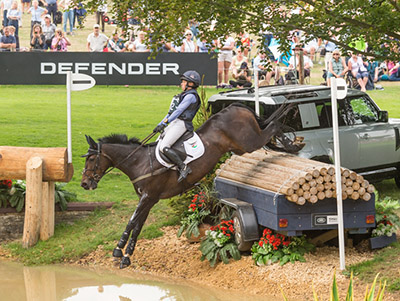 Ros might have only had one horse to ride in the 5*, Pencos Crown Jewel, but she had an action packed schedule with four contesting the Burghley Young Event Horse classes. She picked up a second and sixth place in the four-year-old class, riding Cooley Cleveland and Monbeg Lands respectively, and a third in the five-year-olds on Silvesters Finesse.

Back to the focus of the weekend and ‘Jasmine’ posted a dressage score of 24.2, good enough for sixth place going in to the cross country phase.

“I’m absolutely over the moon with Pencos Crown Jewel!” Ros said afterwards. “She’s such a little trier. She’s not got the biggest step and she’s a bit croup high so bodily she finds it quite difficult but she just nails it every time in terms of effort. If there was a gold star for effort she’d win it every time.

Ros had been concerned that Jasmine would be phased by the crowds on cross country day – the mare is apparently not that keen on people. Going relatively late in the day there was also plenty of time for nerves to build up, however after their clear round, with 12 time penalties, Ros was thrilled.

“I can’t tell you how you how amazing she was. I was quite apprehensive, now I don’t have Alby [Allstar B], I’m stepping into the unknown. I backed Jasmine as a three-year-old and at every level I thought she wouldn’t go any higher, so she’s taken longer to get to this level than others.”

The pair moved up a place to fifth ahead of the final phase, but an expensive showjumping round with three rails down dropped them back to 12th – still a great result. Sarah Charnley was also runner-up in the Horsecare Awards, making it a great week all round.